Creating the perfectly imperfect: How a Barley Bay greetings card is made

Have you ever wondered how a greetings card is made? You could be surprised at the amount of work that goes on behind the scenes to create just one greetings card.

Over to Trevor, Barley Bay’s Photographer-in-Chief, who shares with us how he created iconic Coastal Range greetings card collection.

An idea is sparked

The idea for the Coastal Range was sparked by my interest in combining photography with advanced digital graphics techniques.

At the heart of each design is a real photo – or possibly even two or more. Each photo captures a real moment in time, an experience, a feeling, which I then convey across the medium of a card. It would be easy to use stock images – and many greetings card designers do this. This would certainly be easier and quicker, but it would remove the emotional element and the end result would be somewhat mediocre.

Once the idea was sparked, I had a new purpose to my photography. I had a mission to visit the coast (what a chore!) and shoot boats and harbours. For the job, I used my Nikon full frame camera and Fuji x30 compact camera.
There is something so timeless and so British about the coast and boats. After all, we are an island that relied on fishing and maritime activity for millennia. And there is an added layer of nostalgia for me, son of Southwold folk and just two generations removed from boatbuilders. 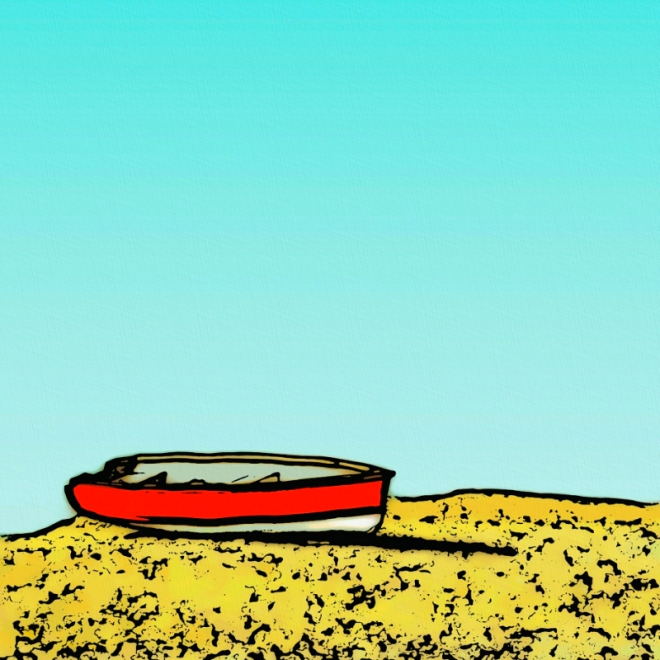 It is no surprise then, that the first image in the series is a celebration of Southwold and the Suffolk coast. I can still vividly remember the day. The day before had been a wild October day and the wind battered us down the pier and I held onto my parents for dear life to stop them being blown into the sea. The next day, the air was clear and crisp and the sea was as flat as a millpond. It was photographically perfect. Sometimes you know which images are going to be good when you take them, and this was one of them.

Pleased with the images captured, it was back in my studio in Buckinghamshire that the second phase began. 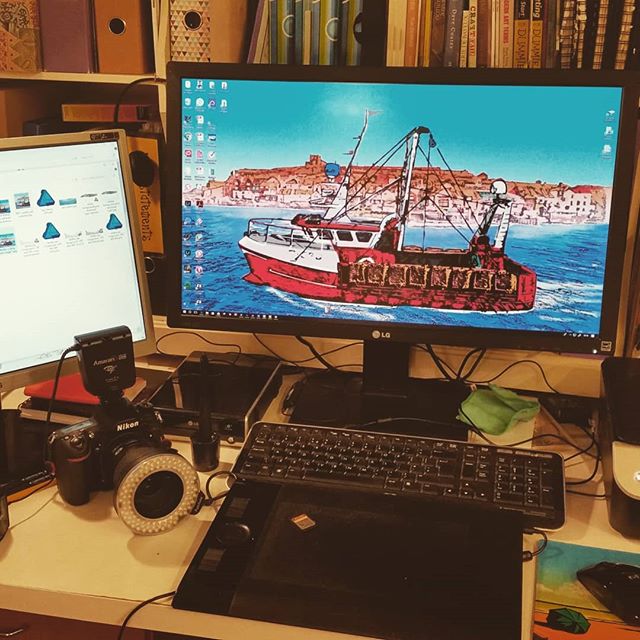 Into the digital darkroom

I was one of the first wave to be acquainted with computers when I studied the revolutionary Computer Studies back in the seventies. This became my life in more ways than one – I began my career in the sector, where I stayed until just a few years ago. However, as I progressed in my career and became a manager, I began to miss the creative side of computing (Yes, programming was creative). And so, the dabbling began.

I have always been a Serif fan, and once they brought out Affinity Photo and Designer I adopted them over Photoshop. I also use a PC rather than a Mac, which over the years has allowed me to build and modify the computer to suit my needs. Using a photographers’ monitor means I work with high colour fidelity and can reproduce the real colours with confidence.

My aim was to produce the digital equivalent of a lino or screen print – simple lines, lots of black, and a reduced colour palette. By simplifying the image and colours, the subject is intensified. An optimistic blue sky crops up in most of our images and is reminiscent of that first sunny, cold day in Southwold.

Alongside the main subject photos, I am addicted to textures and am forever capturing interesting ones on my camera. From harbour walls to stone, castles, and rust – anything can be an inspiration. 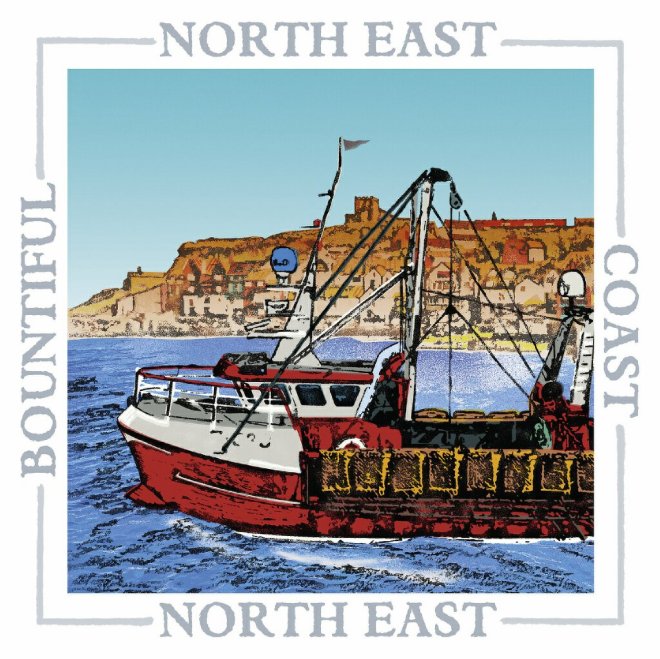 The latest addition to the collection is this red trawler leaving Whitby. It was a complex piece of work and in all took me a couple of weeks to complete. It began life as more than one source photo, which I’ve collaged together. The trawler itself is separate to the townscape, which allows me to adjust the positioning and scaling and create different sizes of images. A small, square image for a card features the trawler closer to the town, while placing the trawler further away from the town would suit larger prints.

This last year, I have concentrated on producing a real texture to the black lines using custom brushes. This creates a lino effect, and I use my tablet to create it, which gives me greater control. I then worked on the townscape with pieces of electronic paper to create a collage. I drew all the buildings from the photo but creating it from a collage resulted in a more simplified and unified image. I am also planning to use a bit of creative license and add the iconic Whitby Abbey in the background. Normally it can’t be seen from this angle, but that is the beauty of creating art in general andno different for digital art!

When I first began this collection, I filtered the colours. Now I also use digital painting with custom brushes using a restrained colour palette. To recreate the look of a retro lino or screen print palette, I look at the original colours in the photo and reduce them by selecting key colours.

Boats are so iconic that I do occasionally meet others who have captured the same subjects. Far from being ‘competition’, this is fascinating, each photographer and artist has their own take. There is a boat at Aldeburgh in Suffolk that is so picturesque that everyone has their own version of it – I was chatting to another photographer who had reproduced it in ice cream colours.

So, you can see that, far from being a shortcut way of creating a lino print, this is a detailed and time-intensive process. An artistic method in its own right. Lino printers use linoleum and ink; I use my camera and the digital darkroom. These are my artistic tools with the added benefit that my hands don’t get dirty.

From the screen to card

Once the image is complete, or perfectly imperfect – as i prefer, we then create the card itself. A template in Affinity Designer is used for the layout, and we can add words as appropriate – they can be regionalised to where they were shot to emphasise the local connection. The template includes the Barley Bay logo and information on the back.

Once we are happy, we create the PDFs and send them to be printed. Over the last few years we’ve developed a better sense of how the ‘colour-proofs’ will come back from the printer. The printed proofs are created on card stock so we can see exactly how the cards will look. We may need to make some adjustments, but once we are happy we can order stock from the printer with confidence.

The Coastal Range currently includes 16 different core images from all around Britain. There are three subranges: the image on its own, the regionalised versions, and sentiment such as Happy Birthday.

We also stock the range in out Etsy shop here. 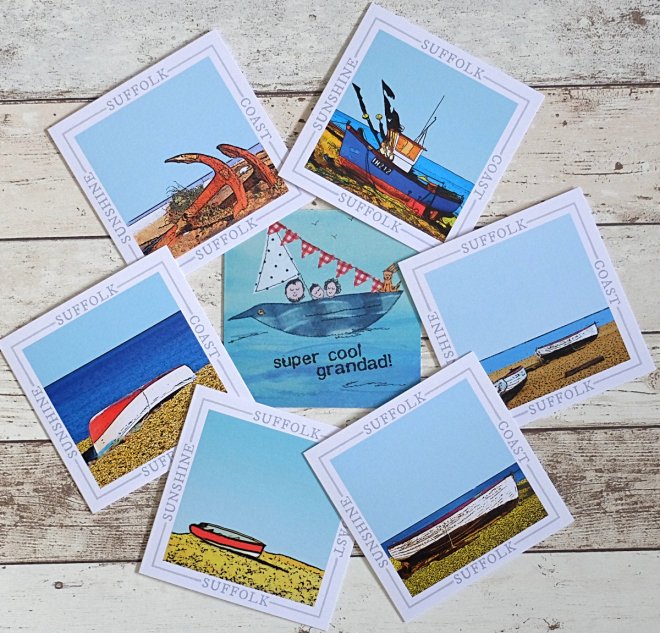 One of our favourite blogs at the moment includes: Justacard on Twitter https://twitter.com/Justacard1

and of course here is the Barley Bay website